If jam equals sunshine as it does in my vocabulary, then this past weekend qualifies as jam-packed.

Friday night Melody and I went out for what was supposed to be dinner, but it ended up being a scallop starter each, a shared bowl of sorbet and countless Virgin Strawberry Daquiris.  As is almost always the case when we see each other, the restaurant started closing around us, but we just couldn’t stop talking.  It was so great to see her; she is tonic for the soul.  We’ll likely catch up again during the week, this time with her husband, Leonard.  I dropped her off shortly after eleven and headed home, only to be pulled off by the cops.  I’m never fazed because I don’t drink anymore, but it is a schlep, even more so when their handheld scanners are on the fritz.  A regular two-minute-routine-license-check took almost fifteen minutes and by then the Sandman had entered already.  It was too late to drink my meds, so I skipped them.  Not. A. Good. Idea.  I had the most awful nightmares, vividly memorable and upsetting as I woke up crying and covered in perspiration.

I had to be up early too on Saturday as Carla and I decided that we’d take a drive through to George as she was looking to buy some ‘not-blue-because-that-is-all-I-have-in-my-cupboard’ tops.  On the way, we picked up a friend of hers, Arissa, who was house-sitting for friends.  The house is stunning and the view left me breathless.  Shopping went rather quickly and I found myself two cashmere-like sweaters at Queenspark for R99 (about $6.50) a piece on sale.  I also bought a snakeskin-look belt.  So I now have a dress, a bodysuit, shoes, a handbag and a belt in the look, but they’re all different colours.  The irony is I don’t own a single full-quill ostrich leather item, and I’ve been in the industry for almost nine years.  I do have a leg-skin purse, so I’m not a completely bad example.

After shopping we spent the afternoon with Arissa, at the place she’s housesitting, chatting over snacks and freshly-brewed Java.  I immediately comfortable with Arissa – she is an open person, with an extremely warm and welcoming personality.  We walked round the grounds and I got to see adult miniature horses and a foal that is not much higher than the resident border collie.  I also got to see a majestic Waterbuck, some springbuck and teeny-tiny little ducklings.  It was such a lovely experience.

Headed off to spend the night with The Toppie and The Bean.  We had chicken, butternut and The Bean’s roast potatoes – as if my Saturday couldn’t get any better! By something to eight I was pulling amps because of the lack of sleep the night before.  My folks went to bed round nine and when I got couch all kitted out for sleep, I discovered I’d left my meds at home.  Skip night number two.  I tossed and turned and again woke up in a glistening film of sweat.  Aside from that, I didn’t feel off, until Sunday night, but I’ll get to that in a bit.  We decided on a whim to take a Sunday drive to Still Bay and Jongensfontein, which is about an hour away. 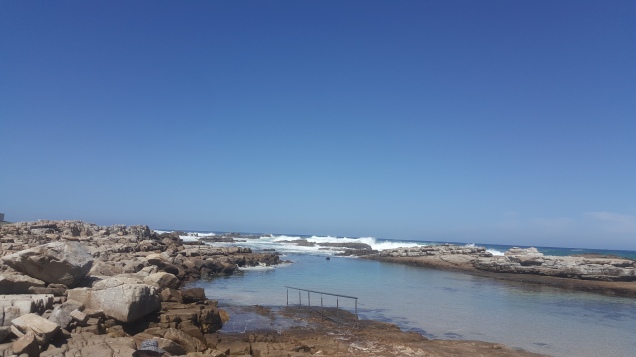 The sky was a cloudless blue and the sun was warm despite the wind.  We stopped at the well-known Lappiesbaai restaurant for a light bite to eat before driving to Jongensfontein.  Seeing the tidal pool brought back memories of a weekend I took away with Carmen, Ewan, Elena and Nick many moons again when Elena was still pregnant with her first-born who is now almost seven.

Sunday night after all the excitement wore off, the lack of medication and restless sleep hit me like a ton of bricks and I sat on the couch, in the eerie quietness of The Cave, with not a single light on.  I was overwhelmed by a feeling of immense loneliness and self-doubt.  I cried.  For how long I don’t know, but at some stage I got into bed and prayed for sleep so that the feelings of no companionship and being the girl that’s always everyone’s friend but no-one’s person could end, even if only temporarily.

What many people don’t realize is that a depressive ‘episode’ isn’t always a case of ‘going ballistic’, or ‘losing one’s shit’ requiring hardcore antidepressants or a stint in a psych facility.  In my case, it is sometimes just an immense moment of immeasurable sadness that has me wondering what my purpose on earth is, and if anyone aside from my parents would really miss me if I wasn’t here anymore.  The smile on my face in the photo is genuine, but in a moment, that smile can be erased as Sunday night is testimony of.

I know this melancholy feeling is something momentary; that it will pass.  I have so much to look forward to, and be grateful for.  I’m just in a dip at the moment.

I have since filled my prescription, and I have back-up meds in my handbag with me at all times now.  What’s that thing we learned as Girl Scouts?  Be prepared!