So, I did what I said I was going to with my previous post and relaxed.

I had a decent lie-in until after nine, a lazy hot shower at ten and made a decision to go somewhere sunny.  At first I thought of going to the local farmers’ market, but the idea of people put me off.

Armed with my phone (for photo taking purposes only – the data was off so nobody could bug me) I ventured down to the Riviera Hotel, close to my house where I spent some time in the sun, reading Humans, Bow Down by one of my favourite authors, James Patterson.  For a long while I was the only soul there and it was bliss to hear the tranquil ripple of the pool and the river and the ocassional cheep of the wagtails. 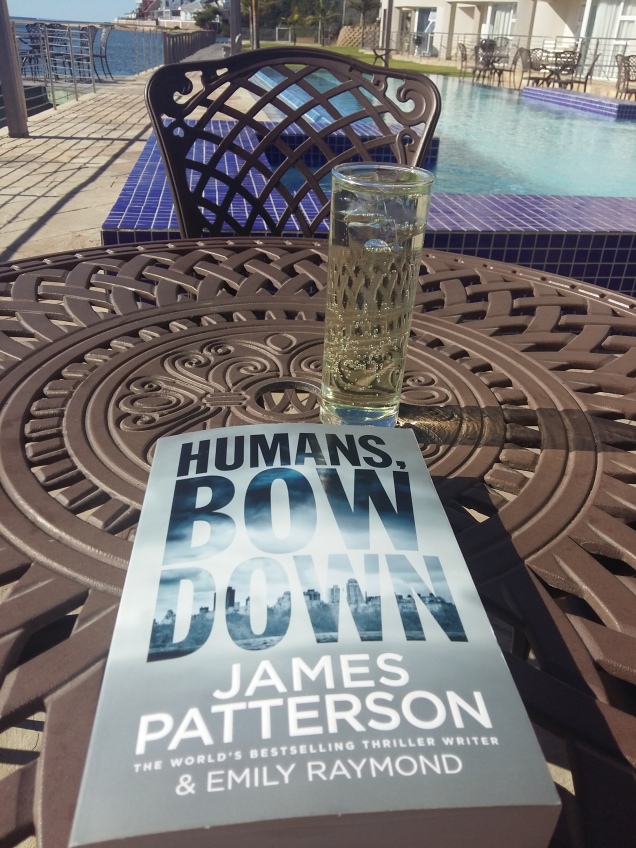 Given that the meds I’m on are somewhat potent, the doctor warned against using alcohol with them, so I opted for a Lime ‘n Soda, because for all anyone else knows, it could have been a vodka 😉

I heard the seagulls squawking, but not overhead.  Turns out, they were having a Mexican stand-off with a cormorant close by.  I don’t think I’ve ever seen a seagull just sitting on the water like that.

The sun got hotter, as did the bergwind, so I moved into the shade, thinking to myself, “You should have brought your bathing costume.” How inviting doesn’t the pool look?

Hours passed before hunger struck.  I went a little overboard, but when I saw prawns and steak, I knew I just had to order the surf and turf.  It didn’t disappoint!  I’ll definitely be having it again sometime, with a glass of wine!

Today though, is Monday, and not a regular one… it started with protest action 😦  Every one is on edge and yesterday’s R&R seems like a distant memory already 😦  The only way to rectify that, is to have another Me-Time Sunday, and soon!

One thought on “Soul-Recharching Sunday”